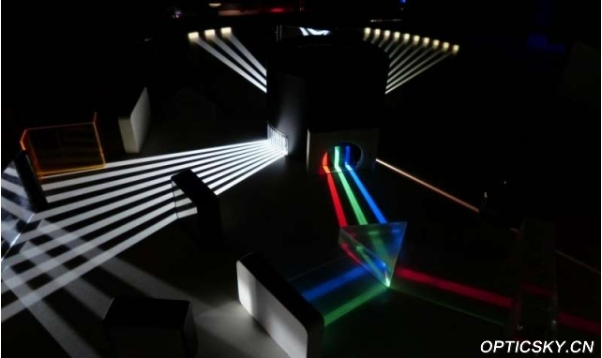 University of Central Florida researchers have developed a new type of laser beam that doesn't follow long-held principles about how light refracts and travels.

The findings, which were published recently in Nature Photonics, could have huge implications for optical communication and laser technologies.

"This new class of laser beams has unique properties that are not shared by common laser beams," says Ayman Abouraddy, a professor in UCF's College of Optics and Photonics and the study's principal investigator.

The beams, known as spacetime wave packets, follow different rules when they refract, that is when they pass through different materials. Normally, light slows down when it travels into a denser material.

"In contrast, spacetime wave packets can be arranged to behave in the usual manner, to not change speed at all, or even to anomalously speed up in denser materials," Abouraddy says. "As such, these pulses of light can arrive at different points in space at the same time."

"Think about how a spoon inside a water-filled glass looks broken at the point where the water and air meet," Abouraddy says. "The speed of light in air is different from the speed of light in water. And so, the light rays wind up bending after they cross the surface between air to water, and so apparently the spoon looks bent. This is a well-known phenomenon described by Snell's Law."

Although Snell's Law still applies, the underlying change in velocity of the pulses is no longer applicable for the new laser beams, Abouraddy says. These abilities are counter to Fermat's Principle that says light always travels such that it takes the shortest path, he says.

"What we find here, though, is no matter how different the materials are that light passes through, there always exists one of our spacetime wave packets that could cross the interface of the two materials without changing its velocity," Abouraddy says. "So, no matter what the properties of the medium are, it will go across the interface and continue as if it's not there."

For communication, this means the speed of a message traveling in these packets is no longer affected by traveling through different materials of different densities.

"If you think of a plane trying to communicate with two submarines at the same depth but one is far away and the other one's close by, the one that's farther away will incur a longer delay than the one that's close by," Abouraddy says. "We find that we can arrange for our pulses to propagate such that they arrive at the two submarines at the same time. In fact, now the person sending the pulse doesn't even need to know where the submarine is, as long as they are at the same depth. All those submarines will receive the pulse at the same time so you can blindly synchronize them without knowing where they are."

Abouraddy's research team created the spacetime wave packets by using a device known as a spatial light modulator to reorganize the energy of a pulse of light so that its properties in space and time are no longer separate. This allows them to control the "group velocity" of the pulse of light, which is roughly the speed at which the peak of the pulse travels.

Previous work has shown the team's ability to control the group velocity of the spacetime wave packets, including in optical materials. The current study built upon that work by finding they could also control the spacetime wave packets' speed through different media. This does not contradict special relativity in any way, because it applies to the propagation of the pulse peak rather than to the underlying oscillations of the light wave.

"This new field that we're developing is a new concept for light beams," Abouraddy says. "As a result, everything we look into using these beams reveals new behavior. All the behavior we know about light really takes tacitly an underlying presumption that its properties in space and time are separable. So, all we know in optics is based on that. It's a built-in assumption. It's taken to be the natural state of affairs. But now, breaking that underlying assumption, we're starting to see new behavior all over the place."

Co-authors of the study were Basanta Bhaduri, lead author and a former research scientist with UCF's College of Optics and Photonics, now with Bruker Nano Surfaces in California, and Murat Yessenov, a doctoral candidate in the college.

Bhaduri became interested in Abouraddy's research after reading about it in journals, such as Optics Express and Nature Photonics, and joined the professor's research team in 2018. For the study, he helped develop the concept and designed the experiments, as well as carried out measurements and analyzed data.

He says the study results are important in many ways, including the new research avenues it opens.

"Space-time refraction defies our expectations derived from Fermat's principle and offers new opportunities for molding the flow of light and other wave phenomena," Bhaduri says.

Yessenov's roles included data analysis, derivations and simulations. He says he became interested in the work by wanting to explore more about entanglement, which in quantum systems is when two well-separated objects still have a relation to each other.

"We believe that spacetime wave packets have more to offer and many more interesting effects can be unveiled using them," Yessenov says.

Abouraddy says next steps for the research include studying the interaction of these new laser beams with devices such as laser cavities and optical fibers, in addition to applying these new insights to matter rather than to light waves.